Here at Blue Ridge green cleaning we only use safe products to clean your home. If you would like to know more about our products or services fill out the form to the right!

Regular use of cleaning sprays can have as much of an impact on health as smoking a pack of cigarettes a day, according to a new study.

Scientists at Norway’s University of Bergen tracked 6,000 people, with an average age of 34 at the time of enrollment in the study, who used the cleaning products over a period of two decades, according to the research published in the American Thoracic Society’s American Journal of Respiratory and Critical Care Medicine.

They found that lung function decline in women who regularly used the products, such as those who worked as cleaners, was equivalent over the period to those with a 20-cigarette daily smoking habit.

“While the short-term effects of cleaning chemicals on asthma are becoming increasingly well documented, we lack knowledge of the long-term impact,” said Dr. Cecile Svanes, a professor at the University of Bergen in Norway and senior author of the study.

“We feared that such chemicals, by steadily causing a little damage to the airways day after day, year after year, might accelerate the rate of lung function decline that occurs with age,” Svanes said.

The scientists advised avoiding the products, and instead using microfiber cloths and water.

For the study, experts measured lung function by testing the amount of air those who took part in the study were able to forcefully breathe out.

They then examined the results alongside a questionnaire in which participants had been asked about the frequency of their use of cleaning products.

According to the study, women who used the cleaning products regularly had a markedly decreased lung capacity.

They also found increased rates of asthma among women who used the products regularly.

“When you think of inhaling small particles from cleaning agents that are meant for cleaning the floor and not your lungs, maybe it is not so surprising after all,” said lead study author Øistein Svanes, a doctoral student.

The experts attribute the decline in lung function to the damage that cleaning agents cause to the mucous membranes lining the airways, resulting over time in persistent changes. 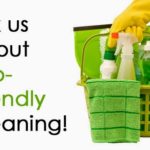